Explos Mountain & Adventure Film Festival Kicks Off on May 8th 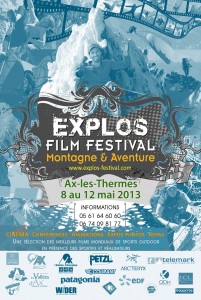 The sixth annual Explos Film Festival kicks off on May 8th, 2013 in Ax-les-Thermes, on the French side of the Pyrenees.

Highlighting mountain and adventure films, the event features all sorts of activities from climbing and kayaking to biking and of course, caving.

According to the schedule, the slot for all the caving films to be screened is the afternoon of Saturday, May 11th, the second last day of the festival.

If you’re in the area, don’t miss it.

118 – 26 minutes
This film, made for the Summer Challenge program of the Swiss television, follows cavers Nina Caprez, Cedric Lachat, Mike Fuselier as they explore muddy pits.

WOWO – 15 minutes
A fascinating documentary following the month-long February 2012 expedition to Wowo cave system in the Nakanai Mountains of Papua New Guinea, in which the team of French and Swiss cavers discovered almost 11 kilometres (6.8 miles) of new passage.

ABANDA, les Crocodiles oranges – 52 minutes
This award-winning film follows the epic adventure of a team of cavers and scientists searching caves in the heart of the Gabon rain forest for crocodiles.

For more information on this exciting event visit the Explos Film Festival website.