Caver Dies, Others Injured After Vehicle Falls Into Cave 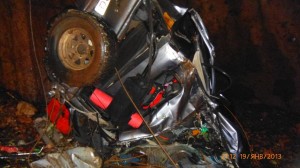 The mangled vehicle in the cave after the fall. Photo via Mountain Rescue of Crimea

In a freak accident, one caver was killed and two others injured after a vehicle fell into the cave they were descending.

Just before 5:00 pm on Saturday January 19th, Mountain Rescue of Crimea were alerted to an accident involving three people and a car at Monastery Chokrack (Монастырь Чокрак) cave in Ukraine’s Karabi – Yayla massif.

Due to the difficult to remote location, it took rescuers two hours to reach the scene across difficult mountainous terrain.

Initial reports indicate that a group of five cavers (three men and two women) came to descend the 80 meter (262 foot) deep vertical cave. The first two men made it to the bottom, and the last three were descending when, for unknown reasons, their vehicle, an Opel Frontera, fell into the cave.

Hit and left injured by the falling vehicle, a 20-year-old woman on descent was traumatized by the incident and somehow managed to disconnect an important rope. This caused the two cavers descending below her, the team leader and a 26-year-old woman, to plummet to the bottom of the cave.

Although the bell-shaped cave is only 4 meters (13 feet) across at the surface, it quickly expands and luckily the two cavers on the bottom were not hit by the falling vehicle.

Following the incident the 20-year-old woman was able to climb to the surface where, upon the arrival of rescuers she was taken to hospital and treated for a knee injury.

Just after 9:00 pm rescuers accompanied by a doctor were finally able to descend the cave. They reported that team leader had not survived the 60 meter (196 foot) fall, while the 26-year-old woman who fell 15-20 meters (49-66 feet) was in serious condition. Furthermore, they were concerned about the danger of fire from the gasoline that had leaked all over the cave from the damaged vehicle. 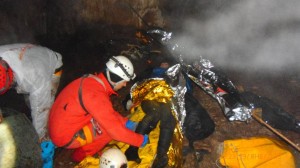 One of the injured cavers being attended to. Photo via Mountain Rescue of Crimea

The two uninjured men were then brought to the surface, followed just after midnight by the 26-year-old woman who was then taken to hospital via ambulance with serious injuries to her pelvis and shoulder.

Eventually, around 7:00 am on Sunday, the body of the team leader was winched to the surface.

An investigation into the incident is now underway.

Update: Facebook user Slava Burdzhanadze reports that the that “important rope” was not actually disconnected by woman, but broken by the falling vehicle.