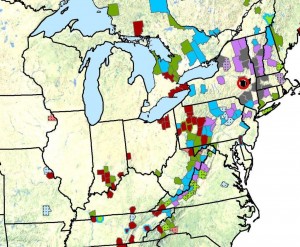 Scientists researching the spatial spread pattern of white-nose syndrome have discovered that bats that hibernate in caves in areas with cold winters are more vulnerable to the disease.

The study, published earlier this week in the journal Nature Communications, used computer models to try to find out what factors play a part in the spread of WNS.

By tweaking variables such as climate (specifically, the length of winter) and cave distribution in the models, researchers at the University of Georgia’s Odum School of Ecology have been able to replicate the existing spread of the disease and have been able to simulate the future path it might follow.

The results of those simulations suggest that the number of new infections will peak during the winter of 2015/2016, with most of the contiguous United States infected in about 100 years from the arrival of the disease, by the winter of 2105/2106.

Although the research made some interesting findings, being one of the few disease models to be developed during the outbreak and not after the fact, it’s important to note that the study did not include Canadian bat data or the potential results of human intervention such as the closing of caves or decontamination of gear into the results.