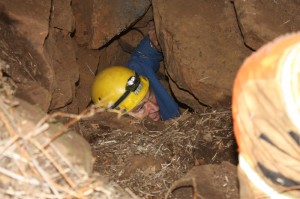 The cave, located in South Africa’s North West Province, had been found previously by cavers Andre Grove, Roger Ellis and Donovan van Staden but its narrow vertical entrance required a special breed of caver to make the difficult climb through its tight squeezes.

An initial eight-hour exploration trip, which involved a group of slim front line explorers, backed by a communication team who relayed news to the surface, resulted in reports that cave continues in all directions and has spectacular chambers with some unique formations.

Return trips are already planned to cave, which promises to be the first major caving discovery South Africa has seen in many years.