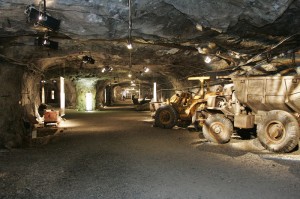 As part of Helsinki’s 2012 World Design Capital festivities, one of the cities gourmet restaurants has set up shop under the nearby town of Tytyri, Lohja.

The restaurant, known as ‘Muru Pops Down in Tytyr‘, has been temporarily set up some 80 meters (260 feet) under the ground on the floor of the former Tytyri limestone mine.

Patrons of the £128 euro (~$165 USD) per person eatery will be treated to a four-course meal featuring down-to-earth food in the spirit of a “mining canteen”.

If eating underground is not enough, visitors are able to venture a further 350 meters (1150 feet) deeper into the earth by taking an elevator ride in the main test shaft used by Kone, an elevator manufacturer who now uses the mine as a laboratory.

Unfortunately for those who don’t already hold a reservation, ‘Muru Pops Down in Tytyr’ is fully booked until it’s closure on September 29th, 2012.