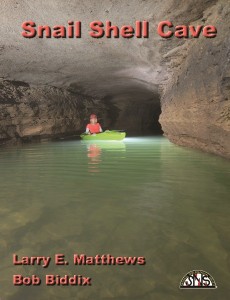 A new book on Tennessee’s Snail Shell Cave has just been released.

Written by cavers Larry E. Matthews and Bob Biddix, the book contains the complete story of the exploration and mapping of Snail Shell Cave, beginning with its discovery in September 1951.

The cave, currently estimated to be at least 80 kilometers (50 miles long), is part of a vast underground system that drains approximately 337 square kilometers (130 square miles) or one-fourth of Rutherford County, Tennessee, where it is located.

The comprehensive 246 page long book contains numerous maps, both black-and-white and color photos, as well as five topographic color maps with overlays of mapped cave passages and the results of dye trace studies.