Going Underground to Reach for the Skies 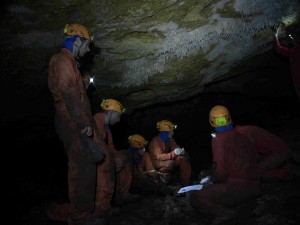 If you’re reading this you’re probably a caver, right? Well, in reality what you really are is an explorer, one with holes in your overall and dirt in your gloves, but an explorer.

What you have done in all those years has been facing the dark, the cold, the humidity, the loneliness and the exhilaration of finding out what’s ahead, adapting to it, living with it, and returning knowledge about it to the rest of the world.

Well, that’s pretty much what Astronauts do too. Usually though they stay far above the Earth surface. You, well, you dig below it.

Caving teaches you discipline, self-confidence, stress management, tolerance for the unknown, alertness towards the environment, your tools, your peers. It teaches you to take hard decisions, and to learn the consequences of them. It forces you to work with your crewmates, to trust them, to care for them.

Well, since 2008 ESA has selected caves and speleology as a terrestrial (well, really, sub-terrestrial) analogue for space, as an environment to develop Astronaut performance as individuals and as teams.

Darkness, constant temperature, limited field of view, physical obstacles, strict safety rules for personal and team safety, isolation, loss of time awareness, limited resupply, need to work as a team. If you add to all that also exploration, documentation of the explored areas (mapping and photography), scientific experiments and sampling procedures, the similarities with a space mission becomes very realistic.

In September 2012 the European Space Agency (ESA) experts have again chosen Supramonte in Sardinia as a scenery for a space analogue mission: the CAVES 2012 training course.

“CAVES” is not just the plural of cave, it’s an acronym, it stands for Cooperative Adventure for Valuing and Exercising HBP Skills. The course trains Astronauts who will need to operate in multicultural teams, maintaining safety and efficiency in
critical operational conditions, during long duration spaceflight.

During the course their team dynamic will be analysed (leadership, communication, cooperation, interaction and group living), as well as their personal efficacy (situation awareness, stress management, decision-making skills).

NASA trains Astronauts in submarine environment (NEEMO) and Roskosmos in survival conditions. They are all critical operational environments, like aviation, air traffic, railway, nuclear powerplant and oil platform control. They all require the same cognitive and teamwork skills. 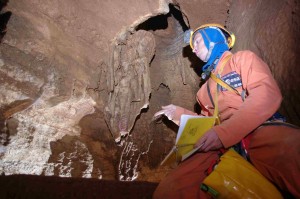 The CAVES 2012 team comprises six astronauts (this year two US from NASA, one Russian from Roskosmos, one Japanese from JAXA, one Canadian from CSA and one Danish from ESA), a human factors trainer from ESA, various speleological experts and technical instructors, a photo and video team and a scientist.

To ensure immediate handling of potential emergencies, safety of course activities is coordinated with the support of the Sardinian delegation of the national speleological rescue organisation CNSAS, the Astronauts will test the TEDRA system with them.

CAVES lasts 12 days, of which the first 5 consist of a full immersion into cave progression techniques, mapping, photography, scientific monitoring, teamwork, safety and mission tasks, followed by 6 days living underground, in a camp setup by the astronauts a few hours from the cave entrance. The crew transfers to the camp is directed by a technical team of caving instructors. Once at the campsite the responsibility for mission success is handed over to the astronauts: they shall explore and document the cave, under the vigilant supervision of a cave safety team. The astronauts will conduct a series of experiments and sampling procedures, according to a daily timeline similar to the one used on the International Space Station (ISS). They shall select a team leader, and assign responsibilities for the various activities (photography, mapping, science, exploration, communication, campsite management and logistics), sharing the tasks. Every evening, they’ll need to analyse their team processes, and learn from their own mistakes, to become by the end of the mission a very effective team.

The scientific programme foresees water, microbiological (air, water, rock), biological samples, and data collection from a micrometeorological station installed in the cave, which monitors temperature, relative humidity, wind speed and direction of air flow. These data allow a constant monitoring of the environment where the astronauts live, and in addition can offer very interesting scientific results (new microbiological or endemic life forms, anomalies in airflow, etc.). The data from CAVES 2011 are very promising, indicating that the course scientific experiments have a value for the speleological investigation of the area rather than just as a training opportunity.

At the end of the mission, once resurfaced to see the light, the astronauts will need to create a report on their activities, elaborating cave maps, selecting photos, constructing graphs and writing a scientific report, which will all be transferred to the next crew of cavenauts.

Speleology, often considered a niche activity, has now for the first time been selected by the international space agencies as a potential resource to enrich and support future missions beyond the borders of our home planet. Speleological explorations, often carried out outside the spotlight, without mediatic impact and of interest only to a limited number of fans, thank to this course show all their relevance and importance for humankind.