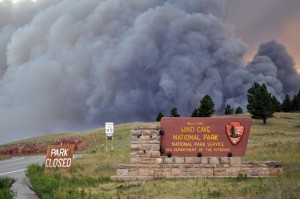 Wind Cave National Park has cancelled cave tours and closed the visitors center due to a forest fire burning only a few miles west of the park boundary.

The Myrtle Fire, which is now estimated at just over 10,000 acres, was first reported last Thursday, July 19th. Since then, it has continued to burn along the park’s western border but has not entered the park boundary.

Due to the extreme fire conditions in the park, visitor services were shut down last Thursday afternoon and park employees and their families were evacuated later that evening to Hot Springs. As a further measure to protect firefighters, power to the park and surrounding area was shut off early on Friday morning.

Highway 385 north of the junction with Highway 87 is closed to Pringle, as are all hiking trails in the park.

As of this morning, the fire is reported to be about 40% contained with an estimated containment date of July 25th.

There is currently no estimation when the park will reopen to visitors, however it is expected to take at least a day to move employees back into their residences and power up facilities once it becomes safe to do so.