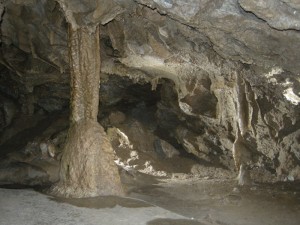 Staff at Oregon Caves National Monument recently reported to Southern Oregon’s Mail Tribune.com that visitors are happy to follow decontamination protocols in order to help stave off the spread of white-nose syndrome.

The simple decontamination process, which involves applying a bleach solution to the bottom of footwear to kill any lingering Geomyces destructans fungal spores, began in 2011 at the monument which draws more than 50,000 visitors each year.

We have found that people don’t lie about this, we have had hundreds of decontaminations involving people who wore the same shoes into caves back East or in Europe, and that’s before they know what the decontamination involves. People are concerned about stopping its spread. John Roth, a natural resource specialist leading the effort to protect the bats at Oregon Caves National Monument

Oregon’s famous Marble Halls are home to eight bat species, including the include Townsend’s big-eared bat.

Monument staff hope to soon begin a program to share their knowledge in dealing with the disease with other nearby private caves such as Sea Lion Caves on the Oregon coast and the Shasta Caverns in northern California.