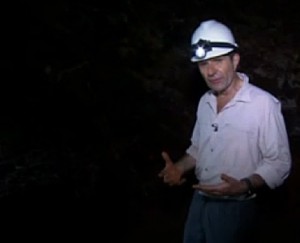 Screengrab via the BBC

Recent discoveries in caves beneath the Amazon jungle are causing a problem for a planned mining operation.

Cavers exploring some of the estimated 1,000 caves in the area have discovered signs of human habitation up to 9,000 years ago as well as unique geological formations and cave-dwelling animals.

These discoveries may prevent Vale, the world’s second-largest mining company, from being awarded environmental permits to develop a massive new open-pit iron-ore mine in the Amazon.

Recently the BBC’s science editor David Shukman along with camera man Tony Fallshaw paid a visit to one of the caves.

Check out the video of their visit over on the BBC website.

The lost caves of the Amazon [BBC]