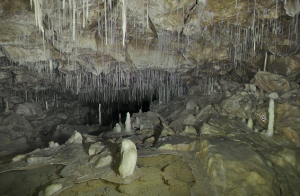 In a similar vein as Google Street View’s visit to a Japanese cave earlier this year, a French company has been creating 360-degree 3D immersive tours of a number of France’s beautiful caves.

In contrast with Google Street View’s visit to Japan’s Akiyoshi-do Cavern show cave, Jphd360, the company behind the tours, has been following cavers to visit caves in their natural settings, without the walking paths.

What makes these tours even better are the maps (hover in the bottom left corner), and the ability to view the cave tour in 3D (click the button in the top left corner).

Being that these tours are dated from 2009 to 2011, it makes one wonder if this is where Google got the idea to visit a cave in the first place.