Visitors Queue Up for Tours of World’s Largest Cave 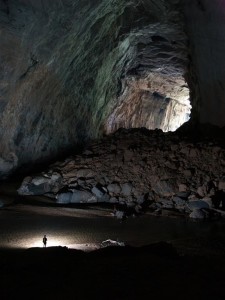 Tourists hoping to visit Vietnam’s Son Doong Cave, the largest cave in the world, will have to wait their turn as the tours have begun to fill up.

In an interview with Thanh Nien, an Oxalis Adventure Company representative announced that more than 100 international tourists have already booked visits of the massive cave in Vietnam’s Phong Nha Ke Bang National Park.

A series of limited six person tours began earlier this month following approval of a pilot program to allow tourism in the cave, which, although first found in 1991, was only explored in 2009/2010 by the British Cave Research Association. Since then very few people have been allowed to enter the amazing cave, as visitation has been restricted for conservation purposes.

As part of the new permit, authorities from Quang Binh Province restricted the pilot tours to only the month of August, before taking a break for the rainy season and resuming again from February-March next year. Providing the pilot program is extended, tours could occur from February to August.

So far, 12 foreign tourists, from as far away as the USA, England, Norway, Russia and Australia, have visited cave in two week-long tours which began on August 1st and August 9th.

The tours, although likely not very difficult for experienced cavers, are reasonably strenuous and involve spending one or more nights camping on sandy beaches inside the cave.

Despite the $3,000 USD cost of the adventure, the one of the first visitors Michael Morehouse maintains that “marvelous views, experiences, and services were well worth the money.”

The next tour is set to begin on Saturday, August 24th.