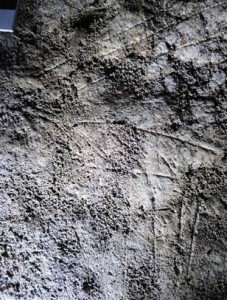 Work will soon be undertaken to protect a Welsh cave after vandals destroyed much of its archaeological value.

Gower cave is thought to contain the oldest recorded Palaeolithic cave art in Britain after an engraving of a reindeer was discovered at the cave in 2010.

Found by archaeologist George Nash from the University of Bristol, the engraving has been dated at around 12,600 years old.

Now a recent visit to the cave shows evidence of fires, missing formation, as well as graffiti etched into the walls. Even worse is that the ancient etching of the reindeer itself was over with mud.

It is believed that the damage took place sometime in the fall of 2011.

From a scientific point of view we can treat these vandals with utter contempt because we managed to get all the recorded data that we needed before the site was damaged. But from a historic point of view it really is a tragedy for the people of Wales because this was a significant part of our past, and an amazing site. George Nash, University of Bristol

Steps are now being taken to secure the cave, which is also an important bat roost, and keep out the vandals.