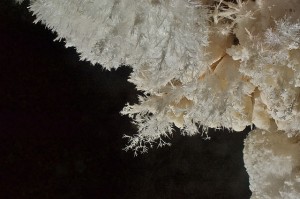 This weekend Jewel Cave National Monument is celebrating the 40th anniversary of the opening of it’s Scenic Tour Route.

First opened to the public on May 28, 1972, the Scenic Tour Route offered visitors a chance to explore new areas of the cave previously inaccessible to visitors via elevators and a paved trail.

Prior to the opening of the Scenic Tour, visitors were restricted to the Historic Tour Route, with it’s unpaved trail and steep wooden ladder-like stairs. Although both routes showcase the namesake crystal formations, the Scenic Tour includes soda straws, flowstone, popcorn, and an assortment of other speleothems.