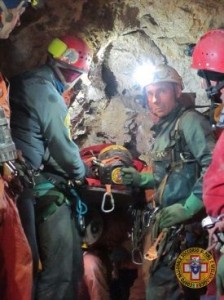 A French caver was rescued early this morning after a 10 meter (33 foot) fall inside Italy’s Antro del Corchia.

The 38-year-old man, fell while making a decent on a classic through trip known as “the crossing”.

Team members contacted the Soccorso Alpino Speleologico Toscano (SAST) who responded to the scene to help retrieve the man.

The man was immobilized for transport after a doctor on the scene found possible fractures in his right femur and right wrist.

Once the cave was rigged for the recovery, the man made his slow exit, eventually reaching the surface at 2:30am this morning. Once on the surface the man was transferred to a waiting ambulance which transported him to hospital.

In all, over 40 people assisted in the rescue.