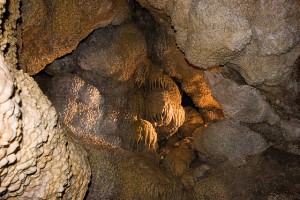 Cave tours at Jewel Cave National Monument finally resumed this past Tuesday after numerous delays caused the one week-long temporary cancellation of tours that began on February 7th to extend for three weeks.

The tours were cancelled so that work could be done on the two 28-story elevators which act as the main access to and from the cave.

The work involved rewiring the elevator hoistway, repairing the position indicators, and installing waterproof door interlocks. A thorough maintenance check was also completed to get ready for the upcoming summer season.

We are excited to open the cave resource once again and allow visitors the chance to witness the second longest cave in the world. Although there is no good time to close a public resource, we felt that the month of February would be best for the scheduled elevator maintenance. We believe the improvements that were made will result in safer and more reliable elevators. Larry Johnson, Jewel Cave National Monument Superintendent

For more information on cave tours visit the Jewel Cave National Monument website or call the visitor center at 605-673-8300 and select Option 1.