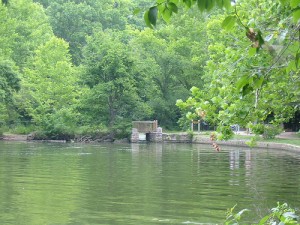 The first stage of a project to remove trash an debris from Goodwin Sinkhole and Goodwin Pit Cave began recently.

Since the late 1950’s Goodwin Sinkhole near Montreal, Missouri has been the site of illegal dumping of all sorts of household refuse, leading to pollution of the underground water.

Dye tracing by the Missouri Department of Natural Resources has discovered that the water that enters the sinkhole emerges 16 kilometers (10 miles) away at Ha Ha Tonka Spring. Discharging nearly 50 million gallons per day into the Lake of the Ozarks, it is one of the largest springs in Missouri.

A Big Job Ahead

Members from the Missouri Caves and Karst Conservancy were joined by Lake of the Ozarks Grotto, Springfield Plateau Grotto, Choteau Grotto, Kansas City Area Grotto, Meramec Valley Grotto, Meramec Valley Master Naturalists Chapter, students from Camdenton and Lebanon schools, and the Boy Scouts of Overland Park, Kansas who worked on phase one of the five phase project, removing trash on the surface of the sinkhole.

Older photos of the sinkhole indicate that there could be (5 to 10 feet) of dirt and gravel and an unknown amount of tires and trash in the sinkhole.

At one time I would say that cave entrance … was 30 feet long and probably 10 foot high at one time when the trash wasn’t there, now it’s a hole about 3 feet around and 7 feet down because of the trash. Ken Long, Lake of the Ozarks Grotto Club President

The goal of the project is to clean out the entire pit and eventually reopen the cave.

We think the cave goes a real long way, there are numerous caves in the area, and they may be linked. We won’t know until we can get inside, but we’ll find out. Klaus Leidenfrost, MCKC President