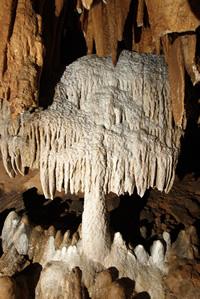 An article recently released by Trav Talk features the work of Missouri cavers who since 1999 have been working on a project to undo the human damage done to Fisher Cave in Meramec State Park.

Beyond removing graffiti and cleaning out gravel used to make trails, the restoration project involves matching of hundreds broken stalactites and stalagmites to their original location and then gluing them back in place.

An employee of 3M, caver Jonathan Beard, has access to lots of different glues and adhesives to enable him to experiment how to best make the repairs.

So far over 200 pieces have been re-attached, and there are another 300 cataloged according to where they were found and waiting to be matched and repaired.