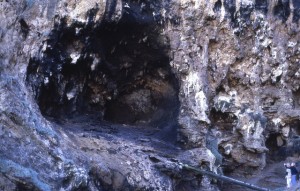 A small piece of ochre with a number of lines in it is being touted as possibly the world’s oldest engraving.

Discovered in the Klasies River Caves in the Eastern Cape province of South Africa, the 7 centimeter (3 inch) fragment of primarily iron oxide dates to about 100,000 years ago.

It contains a series of seven “deep broad engraved lines and several, about 16 or so, narrower and somewhat shallower linear features”.

The fragment is a remnant of a formerly semi-circular ochre pebble that likely contained a much more extensive engraved design on its surface. Riaan Rifkin of the University of Witwatersrand’s Institute for Human Evolution in an interview with Discovery News

Human remains have been connected to the fragment that indicate that it was made by Homo sapiens.

As the result of many tests, scientists have concluded that the incisions on the pebble were intentionally made by early humans. The question now is whether or not the engraver made the design with symbolic intent.

An article with the findings will appear in the April issue of the Journal of Archaeology.

Stone Age pebble may be oldest engraving ever [Discovery News]