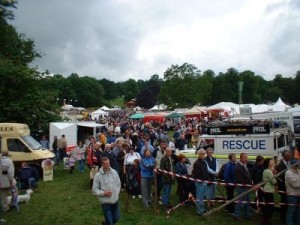 Two Yorkshire cave rescue organizations have suffered a considerable blow with the cancellation of major a fundraising event this June.

The Broughton Game Show, an event held for the past 32 years, annually attracts thousands of people and had been expected to raise around £20,000 for the Cave Rescue Organisation (CRO) and the Upper Wharfedale Fell Rescue Association (UWFRA) .

This year organizers have opted to cancel the event as it falls on the same day as the arrival of the Olympic Torch in nearby Skipton. With all the Skipton festivities competing with the Game Show, attendance would have likely taken a massive hit.

An alternate date had been considered, however many of the entertainers and merchants were already booked elsewhere, and a second rate show would be unacceptable for fear that it would alter folks perceptions in future years.

This is not the first time in the event’s 32 year history that the event was cancelled. In 2001, an outbreak of foot and mouth outbreak caused a cancellation, while flash flooding in 2009 caused another.

Nevertheless, it is a major setback for both groups, as they must now look at alternate ways of raising funds and examine if any cutbacks can be made. They maintain however, that they will continue to provide the rescue service, despite the obstacle.