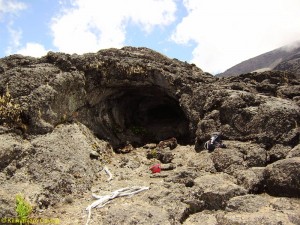 After two years of planning, the first Kilimanjaro caving expedition has met with success. The three member team returned from Africa last month after finding ten significant lava tubes located on the mountain.

After their arrival in Tanzina on September 16th, the cavers set out for Kibo, the main volcano of Kilimanjaro, to search for tubes. By September 27th the team had already discovered the first lava tube ever found on Kibo near their camp, marking the expedition an early success.

In addition to the surface lava tubes the team also discovered trench tubes, another type of lava tube and lots of shelters and blisters, with some of the larger ones often being used by buffalo for the soda salt that is in the rock.

We look forward to the full report currently being compiled by the team.