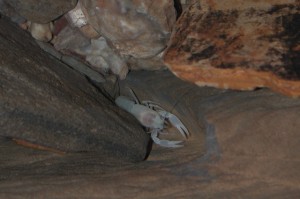 A recent article by Bloomberg describes the strange evolution of cave critters to adapt them to living under the ground.

The story begins by explaining that while most folks that aren’t cavers want to stay above ground, these cave critters purposely seek out caves for protection from the elements or predators. Over time, they mutate and adapt more and more to their subterranean habitat. The adaptions, often unique to a specific cave, make each cave a completely different environment, a sort of living laboratory of evolution.

Continuing on, it explains that cave critters can be categorized into three types:

Creatures that live in caves often lose their eyes and any pigmentation in their skin because of lack of need in constant darkness. Some gain a better sense of smell or longer, more sensitive antennae to help navigate in the dark.

An interesting example of a creature that adapted to cave life is the crayfish. Cave adapted crayfish can live for more than 80 years, not reproducing until they are 40. In contrast, above ground, most crayfish only survive three years.

In Texas, some cave-dwelling millipedes grow up to three times larger than millipedes of the same genus living in soil. Accustomed to living in between spaces in moist soil, once they move to a cave with near 100% humidity, they have more space available and adapt to make use of it.

Some cave creatures gained a better sense of smell. Others developed longer, more sensitive antennae to navigate better in the dark.

Not only are adaptions in creatures taking place, they are also taking place in bacteria and fungi within the caves. This interests pharmaceutical companies hoping to find new medicines and cures.