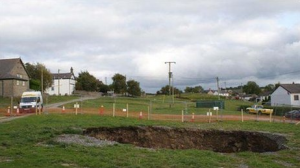 A sinkhole has opened up in Flintshire for the second time. Last year, a 7 meter (23 foot) wide hole appeared next to a primary school near Ysgol Rhes-y-Cae and was capped. It has re-appeared and is almost twice the size, at around 12 meters (40 feet) wide.

The owner of the land, Grosvenor Estate fenced off the hole and enacted 24 hour monitoring while experts try to figure out why the custom-built concrete cap that was installed last fall failed to do the job.

The affected area is known to contain disused mine shafts from lead mining dating back centuries, as well as extensive cave system.

For the time being, the school has asked parents and children to stay away from the area.