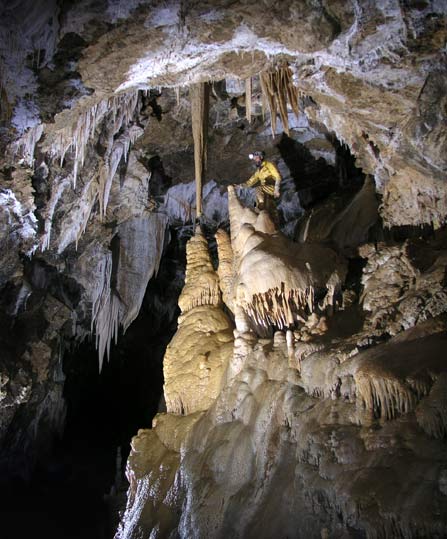 The event drew more than 30 participants from 10 countries. Lots of work was completed, including positioning, digging, gauging of water flows on the surface, and exploring, surveying, diving sumps, photographing in the cave.

As a result, the Chamois Cave is now surveyed to 10 kilometers (6.2 miles) long and 325 meters (1,066 feet) deep. Future trips will work on more exploration within the cave, opening new entrances and diving in the river.

Chamois Cave is located above a waterfall coming out of a cliff near the village of Castellet-lès-Sausses in south-eastern France.

Due the remote location and it’s difficult access few cavers had attempted to explore the cave. Previous attempts were stopped by three successive sumps which blocked the narrow entrance.

It wasn’t until 2008 that the sumps were emptied and the cave could finally be explored.

Two cavers of the French Riviera, Philippe Audra and Jean-Claude Nobécourt, decided to accept the challenge. A first reconnaissance trip at the beginning of summer 2007 is followed by numerous weekends where the two first sumps were pumped out. During fall 2007 the third sump was dived by Laurent Masselin and Alexandre Pougeoise who discovered the continuation leading through vast passages to a huge chamber. A helicopter transport allowed bringing up a generator, fuel, a repressing pump and 300 m of electric cable and pipes to set up a system for emptying the third sump. 2008 begins promising with the access to the “Hormones Gallery”, a huge 20 x 30 m passage that leads more than one kilometer into the Baussebérard Mountain toward the Grand Coyer located at the upstream side of the Coulomp catchment. The Grotte des Chamois then reaches 3 km of surveyed passage [Spelunca, n° 112, 2008]