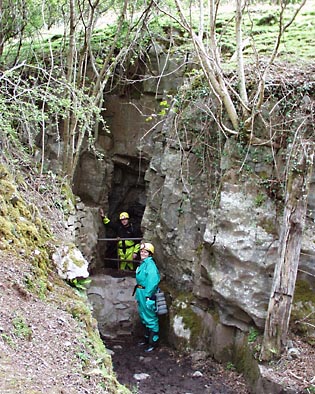 Congratulations to the South Wales Caving Club who recently announced that it has completed the purchase of approximately seven acres of land, including the entrance to Ogof Ffynnon Ddu I.

At 308 metres (1010 feet) deep and 48 kilometres (30 miles) long, it is the deepest cave in the United Kingdom and the second longest cave in Wales.

The purchase, which went through at the end of July, is likely the first occurrence in the UK of a club actually owning a cave entrance.

It came together when, in late 2010, the club was approached by the Toye family, who had owned the cottage and land at Y Grithig for a long time. They explained that they decided to sell the property, and inquired whether the club would be interested in buying a parcel of land that would include many sites of speleoloigcal interest, including Ogof Ffynnon Ddu I and Powell’s Cave.

Realizing the club had a important opportunity before them to secure permanent access and conservation of one of the most important caves in the UK.

Despite a significant sum of money, the club was overwhelmingly in favor of the purchase. Fortunately, a grant was approved from the Countryside Council for Wales (CCW), which accounted for 25% of the cost. The remainder from donations from members and from the club itself.

A major fund-raising event is being planned this autumn to help recoup some of the burden to the club.

The purchased parcel of land has been fenced, and on 3rd August a ceremony took place to commemorate the 65th anniversary of the cave’s discovery. During the event which included the Toye family as guests, a plaque was placed in memory of the late President of the South Wales Caving Club, Peter Harvey.