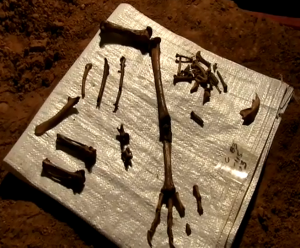 Fossilised remains of a prehistoric bird have been discovered within Leaena’s Breath Cave under the Nullabor Plain in Western Australia.

An almost complete skeleton, it was unearthed amid dozens of bird bones in an area that has been acting as a bird death trap for at least a million years.

The specimen, which is at least 780,000-years-old, will be taken to Flinders University to determine if it is the same species as a wedge-tailed eagle, a modern bird or a new species all together.

The discovery was made during a field trip involving scientists from Flinders University and the Western Australian Museum that is still under way.