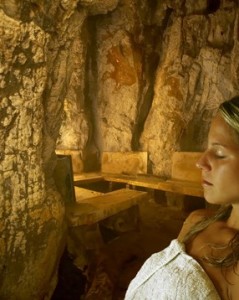 Just in time for the National Speleological Society convention, the underground steam caves at the Yampah Vapor Caves spa in Glenwood Springs have reopened. The caves were closed in early June due to flooding which was the result of a record high runoff.

The depth of the water, which is usually mere inches, rose to a foot deep. At a temperature of as much as 51C (125F), it’s not safe at that depth. With the extra water, new springs have been noticed entering the caves.

The reopening last Friday was celebrated with Tibetan Monks from the Garden Shartse Monastery in central India, who blessed the caves.

The local Ute Indians believe the flooding of the caves is a cleansing process that renews them.