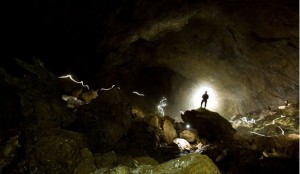 The five-member Extreme Cave Team is at it again. They returned on Monday from a seven day expedition back to the Stormy Pot system, which was discovered last year while taking shelter from a storm.

This trip has once again extended the length and depth of the cave. It now stands at 9.5 kilometres (5.9 miles) long and 760 meters (2,493 feet) deep. It is now believed to be within 100 meters (328 feet) of the end of the neighbouring 24km long Nettlebed cave system. A link between the systems would result in a depth of 1200 meters (3,937 feet), the deepest cave in the country.

“If Nettlebed and Stormy Pot link it will open a system which will take about three days to pass through and spark a lot of interest.” – Team Leader Kieran McKay

The latest discoveries in the cave system include massive chambers, mountains of fallen rock and huge rivers, with crystal clear water.

“We were walking down rapids as wide as a street and swimming in crystal clear water.” – Team Leader Kieran McKay

The team has plans head back to the mountain for another go in December.