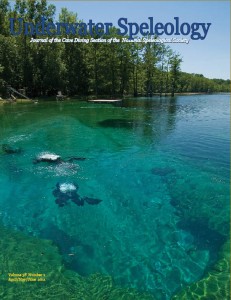 Last week the April/May/June edition of the Journal of the Cave Diving Section of the National Speleological Society, Underwater Speleology came out. Volume 38, number 2’s featured stories include an article on Chan Hol, one of the Yucatán’s best dives, Forrest Wilson’s Down Under Diary, and a visual visit to Madison Blue Springs in Madison, Florida.

Chan Hol stands out as one of Yucatán’s most beautiful and pristine cave dives. Its shallow passages offer small and grand formations, pre-Ice Age fossils, and a clean and easyto-follow layout. The cenote’s name translates from Mayan as “small hole,” but it has yielded big rewards for cave divers.

Also included is a memorial to Agnes Milowka, the cave diver who recently died in a cave diving accident in Tank Cave in South Australia.