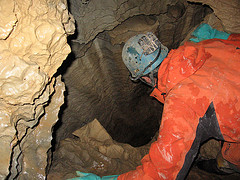 On December 8, 2008, during the XXVII Conference of Speleology, held in Gernika, Spain a topic was brought up by Gorosabel Oier Larrañaga that I’m sure many caving vetrans are familiar with. The lack of new cavers. It is an issue that is affecting nearly all caving groups and is rarely addressed until it is to late.

Caving will never be an extremely popular activity. Few people are attracted to dark places, and fewer still are willing to go through the difficulties cavers endue in order to access them. This is not necessarily a bad thing, as fragile cave systems do not take kindly to high visitor traffic. In fact, for the conservation of caves, it would probably be ideal if no one would enter them at all. However, that would not happen. Even if all the current cavers retired, someone would eventually come along with a rope and a flashlight.

Caving groups have accumulated huge amounts of information about their regions, and when these groups vanish, that information is lost. Someone coming to explore the area in the future would have to start from scratch. Therefore, it is necessary to create conditions that allow for the natural relay of information to the newer cavers.

Caving is invisible to society. Cavers change their clothes and jump into the earth for hours. The public does not have a chance to see them. Gorosabel mentions that although he has had a love for dark places his whole life, it took him 33 years before he discovered his local caving group.

Caving groups are hard to break into. Often it’s a very difficult task to make contact with a group, and even more difficult to participate in their activities. In most cases, an organization is usually made of a tight group, which is reinforced by the fact they spend lots of time together, having very intense experiences that are difficult to relay to people who have not experienced them, even cavers from other groups. “Few things are more boring than listening to several colleagues report their particular ordeal in a cavity unknown to the listener”, writes Gorosabel. Not all potential cavers are stubborn enough, and it is likely that the applicant give up and finds an activity that is better received.

Evolution of a Caving Group

Generally, attempts to attract new cavers are informal without much organization or continuity, with failure as the common result.

While caving has and will always be a minority activity, there will always be a portion of the population interested in visting the dark places underground. The goal is to remain visible to the public so that those potential cavers know where to go.

Educational trips with larger groups of people or schoolchildren are often used to gain new members. The visitors are taken to systems that are not very challenging, but also not very thrilling. While there is a high demand for this activity, it is often not very successful as it fails to get new members, and takes lots of resources (time, guides, etc).

New members that actually successful in attending a trip are often subjected to a trial by fire. Vetran cavers ensure that the potential caver meets the necessary requirements of tolerance to fatigue, pain, cold, heat, humidity, etc. and incidentally make aware of their manhood and superb physical condition. The unfortunate result is that the potential caver is not likely to return.

ADES has been working to increase their membership. The primary goal is to be able to be found by those very few citizens who are attracted caving. Some of the ideas that have been put in place are as follows.

Some achievements of these actions

Collaborations between different caving groups can act as a lifeline for groups in the third or fourth phase as it allows groups that may be too small, to continue to plan trips together and remain active.

It is the unfortunate reality that some groups do not want help, or are beyond help and will eventually go away. The question then is, what happens to all the research and information collected over the years. It is unacceptable that the disappearance of caving group means that the information it has discovered is held hostage or lost. This information should be distributed to other neighbor caving organizations or a public entity responsible for holding such information until another group of cavers come along.