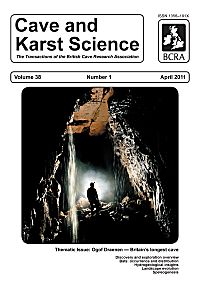 Ogof Draenen is the longest cave yet explored in the United Kingdom and is among the 30 longest caves in the World. One of the explorers, Ben Lovett, provides a brief historical overview of the exploration andthere are four scientific papers from cavers and professional scientists, covering various aspects of the cave. The geology of the area is outlined by Farrant and Simms, who go on to explain the history of development of Ogof Draenen and its place in the landscape. Simms and Farrant then discuss the wider geomorphological implications for estimating rates of base-level incision and uplift in the region, proposing a relative chronology for cave development and landscape evolution. Maurice and Guilford provide an account of the hydrogeology of the cave system and its surrounding area, reviewing previous tracer tests and presenting the results of new tracer tests. Ogof Draenen is also an important bat roost, and observations of bats in the system have been recorded by cavers, and occasionally by bat specialists, since the discovery of the cave in 1994. These records are collated by Kendall and Guilford to provide the first published record of the use of the cave by bats.

For a quick tour to get acquainted with Ogof Draenen, have a watch of a visit by the United Cavers Exploration Team.

Cave & Karst Science Volume 38, Number 1 is now available from the British Cave Research Association (BCRA) online and in print. To order your copy follow the link at the bottom of the article.

The next issue will come in August, featuring articles on the caves in the Mekong region of Asia, Swildons macro-invertebrates and the 3D surveying in Blue John Cavern in Derbyshire. The final issue of the year is planned to be published in December, which will feature the theme of cave archaeology.