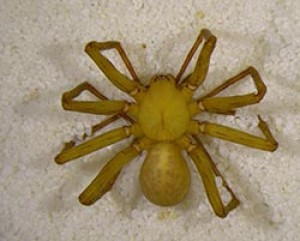 The new species of Liocranoides. Photo via University of Indianapolis

A three-day expedition to Alabama last November has yielded researchers from the University of Florida and Indianapolis some previously unknown invertebrates.

The teams spent the expedition searching four caves for spiders, millipedes and tiny arachnids called pseudoscorpions. Since returning and studying their quary, they have determined that one spider represents a new, sixth species belonging to the genus Liocranoides.

In addition, one of the pseudoscorpions is not only a new species, but apparently a new genus and one millipede from the caves represents a previously unknown subspecies.

The quest will continue this summer, with plans return to Alabama as well as to expand their search to Tennessee, Georgia and Kentucky where the group will visit the Mammoth Cave system.

[via University of Indianapolis]