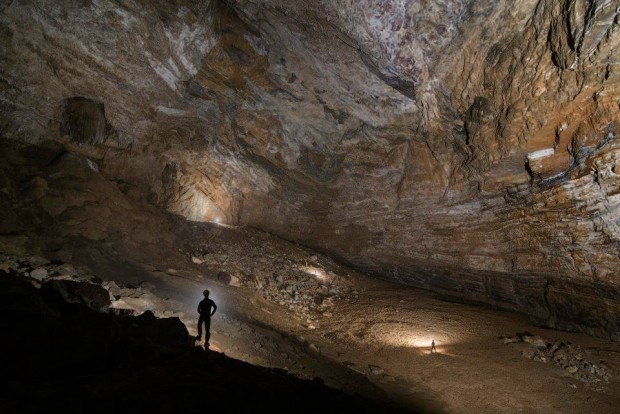 As part of the 2015 expedition, which carried the The Explorers Club flag, cavers explored the upstream sump in Red Ball Canyon of the 700 meter (2,296 foot) deep Sotano de San Agustin section of Sistema Huautla, an area not seen since 1979, and direct aid climbed 180 meters (590 feet) vertically beyond it. It continues to go and is still getting bigger.

They also discovered a new and potentially extensive new part of the La Greta section of Sistema Huautla. Dubbed Mexiguilla due to its similarity with New Mexico’s Lechuguilla, the area has the best formations yet found in the 44 mile (71 kilometer) long cave system.

Working with biologists from Universidad Nacional Autónoma de México (UNAM) and a paleontologist from Mexico’s National Institute of Anthropology and History (INAH), six new species of troglobytic lifeforms were collected and the bones of Pleistocene animals were discovered. Further study is pending.

Besides Sistema Huautla, teams explored and mapped small caves in the area in hopes of opening up new sections of Sistema Huautla. Progress was also made with public relations efforts to gain access to unexplored entrances where Mazatec Indians believe cave spirits reside and fear offending them, resulting in their corn not growing well.

Another excellent expedition. No one got injured and we made a breakthrough exploration discovery. Bill Steele

A presentation on the expedition will be made by Bill Steele at the International Session of the 2015 NSS Convention this July, meanwhile six accomplished cave photographers who attended the trip are progressing with a plan to publish a book of photographs.