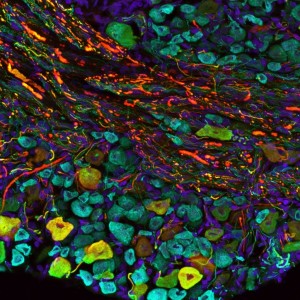 Highly sensitive touch sensors, cells that respond to even slight changes in airflow, have been discovered to play a key role in bat flight.

In research, published recently in Cell Reports, scientists from Johns Hopkins University, Columbia University and the University of Maryland discovered a unique array of sensory receptors in the wing that are unlike the forelimbs of other mammals.

By stimulating the sensors in the wings of Big Brown Bats with puffs of air or a thin filament, researchers noted corresponding activity in the bat’s primary somatosensory cortex. This suggests that the sensors enable the bats to respond to incoming airflow and touch signals by rapidly adjusting wing position to optimize flight control.

This study provides evidence that the sense of touch plays a key role in the evolution of powered flight in mammals. This research also lays the groundwork for understanding what sensory information bats use to perform such remarkable feats when flying through the air and catching insects. Humans cannot currently build aircrafts that match the agility of bats, so a better grasp of these processes could inspire new aircraft design and new sensors for monitoring airflow. Ellen Lumpkin, a Columbia University Associate Professor of dermatology, physiology and cellular biophysics

Besides enhancing control during flight, the unusual tactile circuitry also allows bats to use their wings to climb, cradle their young and capture insects.

Our next steps will be following the sensory circuits in the wings all the way from the skin to the brain. In this study, we have identified individual components of these circuits, but next we would like to see how they are connected in the central nervous system. An even bigger goal will be to understand how the bat integrates sensory information from the many receptors in the wing to create smooth, nimble flight.Cindy Moss, The Johns Hopkins University