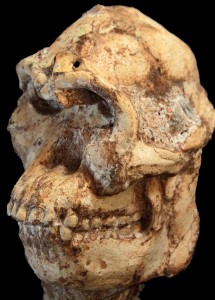 The skull of Little Foot. Photo via the University of the Witwatersrand

A new dating technique has discovered a skeleton named Little Foot is among the oldest hominid skeletons ever dated at 3.67 million years old.

Little Foot is a rare, nearly complete skeleton of Australopithecus, an evolutionary ancestor to humans, first discovered 21 years ago in a cave at Sterkfontein, in central South Africa.

In research published in the journal Nature, a team of scientists from Purdue University; the University of the Witwatersrand, in South Africa; the University of New Brunswick, in Canada; and the University of Toulouse, in France employed isochron burial dating, a form of radioisotopic dating, which uses radioisotopes within several rock samples surrounding a fossil to date when the rocks and the fossil were first buried underground.

The technique, pioneered by Darryl Granger, a professor of earth, atmospheric and planetary sciences at Purdue, was coupled with a powerful detector originally intended to analyze solar wind samples from NASA’s Genesis mission. It resulted in a relatively small margin of error of 160,000 years for Little Foot.

The new date places Little Foot as an older relative of Lucy, a famous Australopithecus skeleton dated at 3.2 million years old that was found in Ethiopia.

There had not been a consensus on the age of the Little Foot skeleton, named for four small foot bones found in a box of animal fossils that led to the skeleton’s discovery. Previous dates ranged from 2 million to 4 million years old.

Besides Little Foot, stone tools found in the cave were also dated using the same technique and determined to be 2.18 million (±210,000) years old, making them the oldest known stone tools in in South Africa.