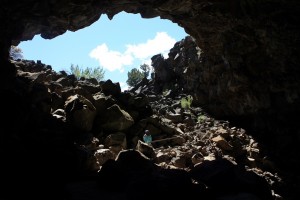 A five-year old child was airlifted to hospital after he fell about 20 feet (6 meters) while exploring a lava tube cave at California’s Lava Beds National Monument on Friday, March 27th.

The child, from Klamath Falls, had been exploring with his family in Skull Cave, when the incident occurred.

Park rangers were the first on the scene. Emergency crews were contacted and the child was airlifted by helicopter to Sky Lakes Medical Center in Klamath Falls. From there he was transferred to Doernbecher Children’s Hospital in Portland where he is now recovering.

Lava Beds National Monument staff are investigating the circumstances of the incident and taking the opportunity to warn visitors of the potential hazards of caving. They urge that the caves are explored at your own risk and safety precautions should be taken.

Helmets, gloves, knee pads, and long sleeves and pants are recommended. Always take at least one light and extra batteries per person and let someone on the surface know of your plans. Caves floors are not smooth or even and there are low ceilings, tight spots, and level changes that may require difficult maneuvers.

Of the approximately 135,000 visitors that visit Lava Beds each year, about 25,000 visit Skull Cave. It is a popular cave due to its large entrance and ice floor. There are no records of a similar incident occurring in this particular cave.