Geomyces destructans, the fungus linked to White-nose Syndrome has been found all over Europe without causing mass mortalities in bats such as the ones being experienced in the north eastern U.S. and eastern Canada, suggesting that the it is native to Europe.

Recent investigations in Europe confirmed the presence of Geomyces destructans in eight European counties studied between 2003 and 2010. These countries span a distance of over 2000 km (1242 miles) east to west. Photographic evidence in a further four countries including Romania and Turkey suggest evidence of the fungus there as well, bringing the total to 12 countries. 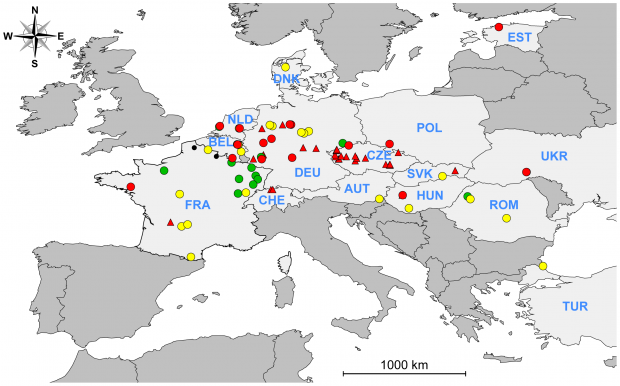 A hibernaculum monitored over two years showed the temporary occurrence of the fungus. First visibile in February, with peaks in March, however it can still be found in some torpid bats in May or June. This pattern was found to be strikingly similar all throughout Europe.

The fungus was confirmed through morphological and genetic analysis.

To read the full study, check out the links below.