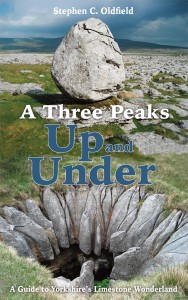 The A Three Peaks Up and Under book cover.

An upcoming book by caver Stephen C. Oldfield explores three majestic mountains of the Yorkshire Dales, Ingleborough, Penyghent and Whernside, inside and out.

Titled A Three Peaks Up and Under, the book details all aspects of Britain’s finest limestone area from its great potholes, legendary caves and waterfalls, to its archaeological treasures.

Beginning with the origins of these karst masterpieces, Oldfield continues by highlighting hundreds of spectacular features including the Boggart of Hurtle Pot, the bone crunching giant of Yordas Cave, the vastness of Gaping Gill and the rib-bending confines of the Cheese Press.

Laced with humour and personal touches that are bound to have even serious cave explorers chuckling, its chapters transports the reader up onto the peaks and plateaus, and then down deep into the caves.

Set to be released in April 2015, the book is currently available for pre-order online at Scratching Shed Publishing Limited.