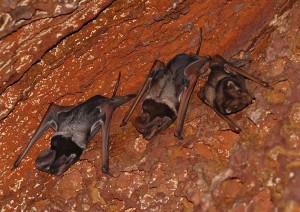 The discovery of several new roosts of Wroughton’s Free-tailed Bats (Otomops wroughtoni) in a number of Indian caves has increased the number of known individuals of the rare species to nearly 200.

Previously limited to a single breeding colony in southwestern India, as well as two single individual bats recorded in Meghalaya, India and Cambodia, the new colonies were found in caves of the Jaintia Hills of Meghalaya in northeastern India during the Caving in the Abode of the Clouds Project in February 2014.

During the study, whose results were published recently in the Journal of Threatened Taxa, researchers identified thirty potential bat caves. Of those thirty caves, Wroughton’s Free-tailed Bats were observed in two.

In a third cave, near the village of Thangsah, the characteristic loud and audible screams emitted intermittently by alarmed Wroughton’s Free-tailed Bats were heard coming from a tight crevice, however the bats could not be located.

While these discoveries are encouraging as they considerably extend the geographic range of the species and give hope that the population may be even larger, the researchers are now even more troubled about severe and ongoing degradation of the regions caves.

Caves in the Jaintia Hills are under threat of from unregulated limestone and coal mining, and the forests, the bats foraging areas, from logging. Unfortunately, although the bats themseleves are protected under national laws, their habitat is not.

The researchers are now urging for a protection plan that would include more extensive surveys and a strict conservation policy to protect this vulnerable species.