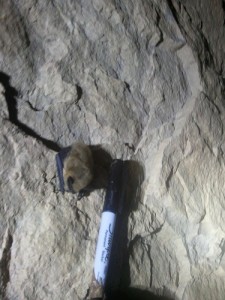 For the first time in more than 100 years a rare species of bat has been discovered roosting in an Ohio MetroPark. Last month a research assistant from the Ohio State University School of Environment and Natural Resources netted an Eastern small-footed bat. The nets having been placed to track migration paths of bats.

The eastern small-footed bat is usually found in Canada and is the smallest species of bat in North America weighing in at between 4 and 8 grams (0.14 and 0.28 ounces). Despite their weight they manage to have wingspans 18 – 20 centimeters (8 – 9 inches) long.

Through the use of a radio transmitter attached to the bat, researchers were able to track down the roost of the bat which had been staying within rock crevices in Castalia Quarry MetroPark. The tiny visitor stayed only a few days before it continued on it’s journey.