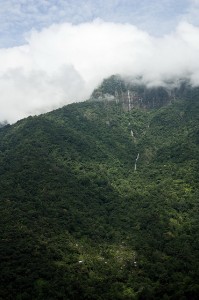 An international team of cavers participating in the 20th Caving in the Abode of the Clouds Expedition explored a new cave in India’s Jaintia Hills district.

Strewn with massive boulders, the cave known as Krem Khung was surveyed to 5.12 kilometres (3.18 miles) in length during the 16-day expedition, which took place from February 7th to 22nd.

In addition to the discovery, the teams worked on surveying of Krem Lymke, which should be completed next year. They also increased the length of Krem Labit Kseh in the Kopili Valley by nearly 300 meters (984 feet) to a total length of 5.99 kilometers (3.72 miles).

The cavers, which hailed from the UK, Germany, Switzerland, Austria, Romania, the US, Portugal, Iran and India split into two teams, the first operating in the areas of Kseh, Larket and Khahnar of Jaintia Hills and the second working in Mawsynram and Balat areas of the East Khasi Hills.

The only negative part of the trip was the unwillingness of the Nongtrai village committee to give permission for the team to visit a cave in the area.