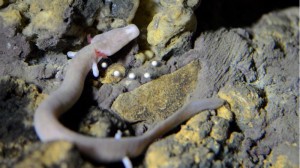 For the first time, a female olm has been observed laying eggs in Slovenia’s Postojna cave.

Although the species, Proteus anguinus, has been able to reproduce in captivity without problems, this discovery marks the first observed reproduction in the cave.

Discovered lay its eggs on August 10th in the aquarium of Postojna Cave, the cave salamander was isolated from other salamanders and visitors, who can now view the process through an infrared camera.

This is a true miracle of nature and for us also proof that the cave and the life inside of it are being taken care in the best possible way. The new organisms coming to life in the cave attest to the fact that the conditions inside the aquarium are truly similar to those in nature.

Despite being able to lay up to 70 eggs, at last report she had only laid 15.

If all goes well, the new babies will hatch by the end of December.

An entirely aquatic species, the olm eats, sleeps, and breeds underwater in the caves of Central and Southeastern Europe. Adapted to a life of complete darkness, the olm’s eyes are undeveloped, leaving it blind, while its other senses, particularly those of smell and hearing, are acutely developed. It also lacks any pigmentation in its skin.