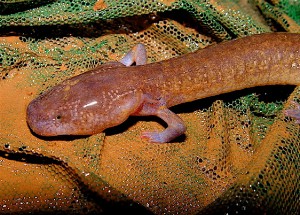 The U.S. Fish and Wildlife Service has found the Berry Cave salamander to be threatened enough to be added to the federal list of threatened and endangered species.

This cave-dwelling salamander endemic to the United States is found in eastern Tennessee in just a few caves. They are distinct from other salamanders because they do not mature into the adult form. In fact they reach reproductive maturity while still in their larval form.

These aquatic critters are threatened by habitat loss and water contamination caused by urban development near caves where they reside. They are also at risk of hybridization with other salamander species, specifically the Spring salamander.