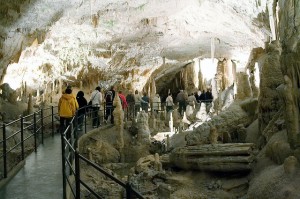 Slovenia’s Postojna Cave saw a six percent increase in visitors for a record total of over 521,000 visitors in 2011.

The annual statistics indicate that the visitors came from over 160 different countries, with the majority coming from Italy, Germany, Slovenia and Japan.

At over 20 kilometers (12 miles) long, Postojna Cave is the longest cave system in Slovenia as well as one of the top tourist destinations.

It is known for its Concert Hall, which has exceptional acoustics and enough space for up to 10,000 people. Symphony orchestras, octets, and a variety of soloists have performed in the cave.

With more than 5.3 kilometers (3.3 miles) of the cave open to the public, it is the most publicly accessible cave system in the world. It’s so large than a cave train was introduced in 1872 to help transport the tourists.

The cave is also home to the endemic olm, the largest trogloditic amphibian in the world. In order for the public to view the creature, the cave tour includes an area with an aquarium that houses olms.