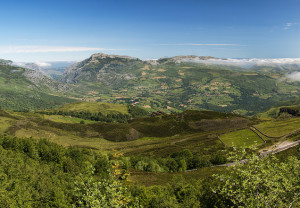 A group of four cavers were rescued on Tuesday after spending four days lost underground.

The cavers, part of the caving group Espeleo Minas, departed on Saturday morning on a route between Acebo and Rubicera, an 8 and 15 hour-long trip in Spain’s massive 120 kilometer (74 mile) long Sistema del Mortillano. Eventually arriving at a narrow passage, the group realized they had made a wrong turn and were lost. They decided to set up shelter and wait to be rescued.

None of them expected to be waiting as long as they did.

Meanwhile on the surface, friends were waiting for them to return for dinner. Not alarmed when they did not arrive on schedule, they kept waiting for notification that the team had made it out. When the cavers did not arrive by the next morning, they alerted authorities.

Rescue crews began searching the system on Sunday recreating the trip the cavers had planned to make. When their name was not signed in a log at a checkpoint the cave, the crews assumed they had not made it past the first part of the journey.

Continually expanding their search over the next few days, it wasn’t until Tuesday, when two of the missing cavers began searching for help themselves, were they finally found.

As the days passed, with no sign of rescue and their food running low, the two more experienced cavers, 45-year-old Alfonso Gutiérrez Gómez, and 32-year-old Joaquín Gómez García, had decided to try to find a way out.

Rescuers located Gutierrez and Gomez in a gallery close to Rubicera, one of the entrances to the cave system. Soon after, a different group of rescuers exited the cave with the other two cavers, Bruno Martínez Pledel, aged 49, and Isabel Carrillo Gil, 33, from a different entrance.

All were in good health, but were taken to hospital as a precaution.

With more than 20 entrances, Sistema del Mortillano is a labyrinth of passages and reportadly one of the most difficult cave systems in Spain.