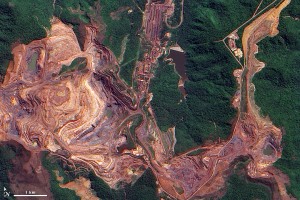 Satellite View of the Carajás Open-Pit Mine. Photo via NASA Earth Observatory

A planned expansion of one of the world’s largest iron-ore mining complexes is threatening to destroy dozens of archaeologically significant caves in the Amazon.

Vale, a Brazilian metals and mining corporation, is planning to expand its open-pit mine at Carajás and increase its iron ore exports to China. The $20 billion project, dubbed Serra Sul, is part of an effort to kick-start Brazil’s sluggish economy.

Unfortunately many caves, including 24 which are highly important archaeological sites, are located in the expansion area and destined to be lost.

First discovered in the 1980s, the caves show evidence of some of the earliest human settlements in the Americas and offer clues into how the continents became inhabited. The sheer abundance of these caves make Carajás one of the Amazon’s most important places for the study of prehistoric humans.

This is a crucial moment to learn about the human history of the Amazon, and by extension the peopling of the Americas. We should be preserving this unique place for science, but we are destroying it so the Chinese can open a few more car factories. Genival Crescêncio, caver and historian in Pará State

Hope that a crucial environmental permit would not be granted was lost when, despite archaeological concerns, the government approved the license this past June. Now only an installation permit, expected to be granted in 2013, is required for the project to proceed.

Many cavers and archaeologists have already resigned that the Serra Sul project will go ahead.

Brazil Expands Mines to Drive Future, but Cost Is a Treasured Link to Its Past [New York Times]