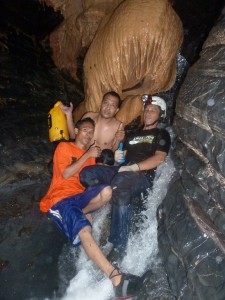 There are dozens of limestone hills running in a north-south line through this area and only a few of them had been explored by cavers.

The expedition was very successful, in seven days of caving we looked at 26 caves and surveyed seven of them. One of the best finds, a 927 meter (3041 foot) long river cave, was found on Malaysia Day and so named Gua Hari Malaysia. It is a through cave and has a wide variety of cave fauna including several colonies of bats. In the streamway outside the cave, both up and downstream, we found elephant bones.

Other caves had large chambers, lots of formations and interesting geology. Many of the caves were home to cave fauna, particularly bats, as well as invertebrates such as whip and huntsmen spiders, scorpions crickets etc. We also saw some cave racer snakes and porcupine. 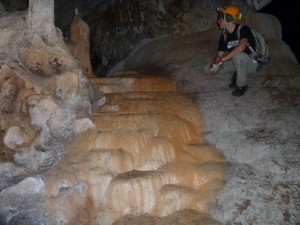 Unfortunately some of these caves are in danger of being destroyed by quarrying. Some of the hills have been ‘acquired’ by one of Malaysia’s largest quarry and cement companies. The locals are signing petitions to give to the local government and quarry company.

During the trip, the Croatians were also able to train the locals in safe use of ropes for SRT (single rope technique).

Since the expedition I returned to look for more caves with the locals, and in three days we found another nine caves. Some have interesting geology, in particular Gua Sisik Naga has some wonderful stylolites – wavy bedding surfaces.

To see photos and learn more about the expedition or the followup expedition, visit my photo blog at cavinglizsea.blogspot.com.

About Liz Price
Liz Price is an English caver living in Malaysia. Having caved in many countries around the world, she now has a keen interest in cave fauna and is documenting the caves in Malaysia. She maintains the websites cavesofmalaysia.com, Caving in SE Asia and Caves of Myanmar.
Sorry, comments have been closed.