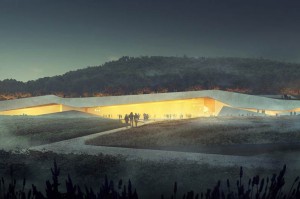 A Rendering of the Future Lascaux 4. Photo via Snøhetta

Yet another replica is being created of the Lascaux, the famous French cave that is home to some of the world’s best-known cave art.

The project, known as Lascaux 4, aims to reproduce the whole cave instead of only the two rooms currently duplicated in the first replica, Lascaux 2, which was constructed in 1983.

Discovered in 1940, the cave was closed in 1963 after it was found that moisture and carbon dioxide from visitors breath was degrading the precious artwork.

In addition to a total recreation of the original cave, Lascaux 4, designed by Norwegian firm Snøhetta, will feature a digital presentation, space devoted to the interpretation of cave paintings and enough capacity to accommodate up to 400,000 visitors per year.

Recently opened in Bordeaux, Lascaux 3 is another addition to the Lascaux family. The traveling exhibition, which features of reproductions of Lascaux’s cave art, will travel across the world over the next few year visiting places such as Chicago, Hong Kong, New York, Shanghai and Los Angeles.