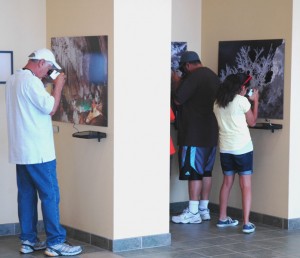 Underground of Enchantment, the photo exhibit that feature images of Lechuguilla Cave in 3D, has opened at the Carlsbad Caverns Visitors Center.

On loan from the city of Carlsbad, the exhibit first opened last summer at the Carlsbad Museum and Art Center.

Underground of Enchantment features the works of David De Roest, Michel Renda, Daniel Chailloux, Peter & Ann Bosted a group of talented cavers/photographers from Belgium, France & the United States who wanted to share the experience of Lechuguilla Cave with others.

Part of Carlsbad Caverns National Park, Lechuguilla Cave was first discovered in 1986. In order to protect the cave’s natural features, including its microbial life, access into the cave is limited to about one hundred explorers and researchers each year. So far they have explored and surveyed over 215 kilometers (134.6 miles) of cave passages, making Lechuguilla one of the longest caves in the world.

The exhibit will be on display at the Carlsbad Caverns Visitors Center until the end of August. The Visitors Center is open daily from 8:00am until 7:00pm, with free admission.

For more information head on over to the official Underground of Enchantment website.