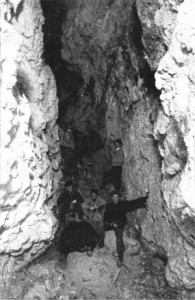 A new book has been released that tells the story of the creation and downfall of Wyoming’s Shoshone Cavern National Monument.

Written by University of Wyoming History Professor Phil Roberts, the book, Cody’s Cave: National Monuments and the Politics of Public Lands in the 20th Century West, recounts the initial discovery of the cave near the town of Cody in January 1909, its designation as a National Monument by President William Howard Taft later that year, and the political debacle that led to its transfer to the U.S. Bureau of Land Management in 1978.

The 2,500 feet (760 m) long cave has since been closed to visitors and has now been largely forgotten, even by locals.

The story is a cautionary tale for those who may believe that federal designation equates with permanent protection for a site they may cherish, Phil Roberts, Author

The 177 page book is published by Skyline West Press and is available online at Barnes & Noble or in bookstores and museum shops across the Wyoming.